We Need a New Humanism

“Today, the protesters are millennials and Generation Z (individuals born after 2000). In Chile, students traditionally represent the social conscience of the country. And they are committed. One aspect that surprises me is that no political party is leading the rebellion. It is truly a people’s protest. Nor does it look like there is a party ready to take control of the situation and resolve it. Perhaps, the only on is the Frente Amplio, the student party that between 2006 and 2011 protested against President Bachelet and the extreme privitisation of the school sytem. Many of its members were lated elected to parliament. Nonetheless, I’m perplexed. People are no longer interested in politicians. What will happen? The army is on the roads and people fear another coup. Perhaps, a step by Piñera could be the answer. However, that would require the creation of some type of constituent assembly to rebuild the system.” Redistributing riches to all citizens, removing the privileges of a ruling class, the will to conceive a new humanism founded on knowledge and inclusion. This is Prof. Molina’s recipe for Chile’s future.

Journalist Ambra Notari interviewed Scientific Director Alfonso Molina Alfonso Molina for the  Redattore sociale. Prof. Molina was “born and grew up in Chile until the 1973 coup by Pinochet forced him to flee.” The link to the full interview is below: 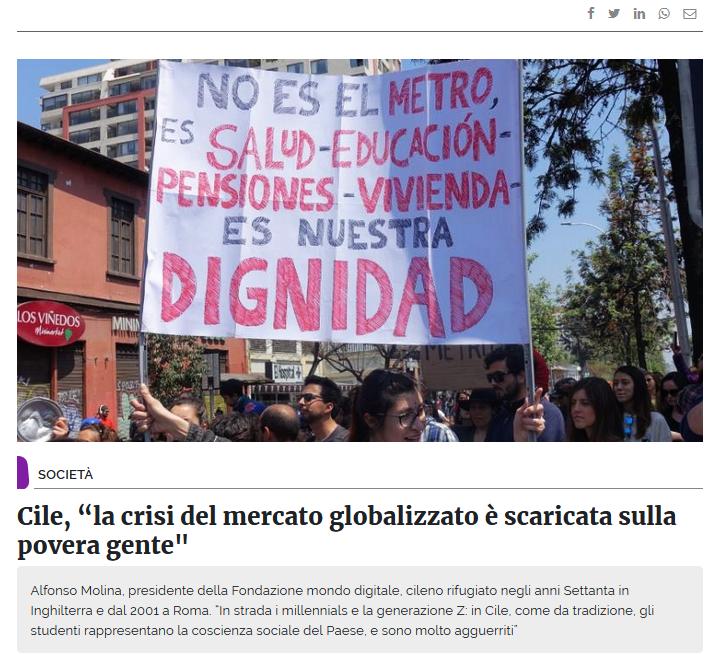